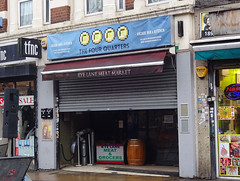 This is a small bar in a former meat market (according to the canopy) on Rye Lane in Peckham. Reviewers have called it an "arcade bar" or a "barcade" as it contains 15 vintage arcade machines such as Pacman, Asteroids and Space Invaders and also has an N64 which, when secretlondon visited, was being used for a Mario Cart competition. They have a change machine giving 4 US dollar quarters for £1 for use with the machines.

It has lots of bottle beers and about 12 or so draft beers on keg, no cask beers.

There was electronic music in the background. It apparently does food but I didn't see any when I visited. It was about half full when I arrived in the early evening on a Sunday before a bank holiday in March. It was very full later. There is a room upstairs but I didn't go up there and I am not sure it was open.

Accessibility: There is no step to enter and it has an accessible toilet without a RADAR lock.