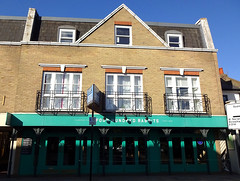 Four Hundred Rabbits opened in August 2015 on Crystal Palace's already pizza-saturated "triangle" zone of shops and restaurants. Their focus is on fermentation — pizzas are on a sourdough base, and they serve a selection of craft beers both local and imported. The menu is mostly pizza but they also offer a few salads. They sell Gelupo brand gelato and sorbets for dessert. The set menu is small but interesting and there are also weekly blackboard specials (mostly containing meat).

Bec has visited with friends a number of time since its opening. I particularly enjoyed the tomato-sauce-free pizza with courgettes, garlic, pine nuts, feta, mozzarella and thyme (£7.75) but also rate the more traditionally marinara sauced pizza with piquillo peppers, pimenton, mozzarella, and rocket (£8.75). The pizza is a good portion but leaves plenty of room for the delicious gelato. In addition to the craft beer selection, there are a few intersting soft drinks and teas available.

They don't take bookings and are usually very busy from 7:30pm onwards, especially if you have four or more diners, but if you arrive before then (weekdays) you're unlikely to have to wait for a table.

Child-friendliness: They have a few highchairs.