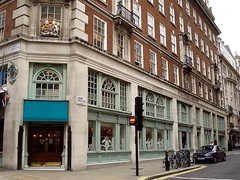 The Fountain was one of several restaurants in Fortnum and Mason. It closed in mid-2015, and is due to be replaced in late October 2015 by a different restaurant called 45 Jermyn Street.

There are several restaurants throughout Fortnum and Mason. The Fountain restaurant is around the back with the entrance on the corner of Jermyn Street and Duke Street (though you can enter through the store).

It is possible to turn up early on a Friday evening - around the time people are having pre-theatre meals - and get a table without needing to book, and there is no dress code - your humble reviewer DrHyde was allowed in while wearing one of the more offensive T-shirts in his collection.

The menu is small and mostly English, with not a great deal of choice for those suffering from vegetarianism. I had fried foie gras for the starter (with brioche and a fried egg), osso bucco with a cheesy risotto and some good bone marrow, and an apple and pear crumble. All were done very well. My dining companions had other dishes and were complimentary about them all.

As is expected at Fortnums there is a good selection of drinks - several of their tea blends, coffees, and wines. We had a nice bottle of Fortnum's own-brand Portuguese red with the meal, as well as dessert wines to finish, and paid £45 a head, which is pretty damned reasonable for the quality and the area.

I have a few minor niggles. While the service was generally good, we did have to ask a couple of times to have water glasses re-filled and they wouldn't just leave a pitcher on the table. And when two of us ordered dessert wines, they turned up promptly but the waiter had to be reminded about the coffee that was also meant to come along for the third member of our party. And weirdly, they can't seem to split a bill unevenly. It was either pay on one card, or split it equally three ways, but they couldn't do a 2:1 split.

But those are minor issues. For the quality of the food and drink, the generally good service, the cheap prices, and being able to just randomly turn up and eat instead of booking, the Fountain restaurant gets two thumbs up.