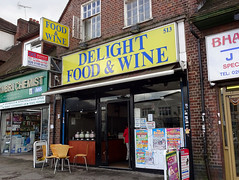 It's just a few doors along from Kingsbury Station, located in what might appear at first glance to be nothing more than a convenience store — presumably the shopfront is left over from a previous occupant. It's totally vegetarian, and specialises in street food such as pani puri, vada pav, and so on.

The atmosphere is very casual, with food and drinks ordered from the service counter which separates the open kitchen from the rest of the space. A walkway runs through the centre of the room further into the building, where signs indicate the presence of a paan shop and a eyebrow-threading salon. Across the walkway from the counter, three tables seat a total of twelve people.

The walls are painted plain cream, festooned with home-made A4 posters advertising various menu items and providing advice such as "Keep calm and enjoy pani puri". All food is served on disposable packaging, and signs remind customers to clear away their own rubbish into the bin.

Kake visited on a Thursday lunchtime in August 2017. There were three other customers when I arrived around 12:30pm. No music was playing.

Pani puri (8 for £2) photo were fine — crisp, fresh shells pre-filled with just the right amount of mashed potato, black chickpeas, and fresh coriander. There was a choice of five waters including chilli-lemon, garlic, and sweet. The garlic water was nicely balanced, not overly garlicky. Two of the eight shells had small holes in, but the rest were all intact.

I also had a cup of masala tea (£1), for which I was offered the option of having sugar added or not (I chose not). It was pretty good, not too milky, though perhaps a little heavy on the cardamom to the detriment of other spices.

Kake's verdict: The prices here are very good, and I'd like to come back and try more of the menu.

Accessibility: A small step to get in. No obvious customer toilet.