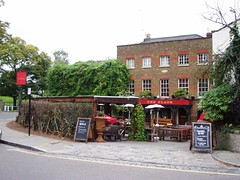 Pub in Highgate. Previously owned by Mitchells & Butlers, it was acquired by Fuller's around the start of 2009.

Inside there's a series of little wood-panelled rooms, on many different levels with stairs between them, and often low ceilings. It has a large beer garden photo.

In September 2008, prior to the Fuller's takeover, the ales available on pump were Pride, Adnam's Bitter, and Broadside, with one of the five pumps off (the other pump had Old Rosie scrumpy). A large range of draught beers included Sierra Nevada, Meantime London Pale Ale, Leffe, Fruli, Hoegaarden, Budvar, Pilsner Urquell, Peroni, Staropramen, Franziskaner (£3.90/pint) and Aspall's cider. These options may have changed since the change of management; the non-real-ale options in particular were characteristic of Mitchells & Butlers pubs.