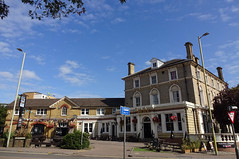 Pub in Watford, right next to Watford Junction Station.

It's a large space, divided up internally by large pillars and wooden railings to save it from seeming too cavernous. Decor is somewhat inconsistent, with at least three unrelated colours used to paint the half-panelling of the walls, and light fittings that almost, but not quite, match each other. Flooring is a mix of vanished boards and patterned carpet (the latter having a relatively subtle pattern for a pub carpet). One nice touch is the old photos of Watford here and there on the walls.

There's a separate and more dimly lit room at the back, with fairy lights and a pool table. Plenty of outdoor seating is provided at the front of the pub.

Kake visited on a Thursday morning in August 2017. There were a handful of other customers in when I arrived around 10:30am, and a few others turned up while I was there. Music was playing, not too loud.

Of the five handpumps on the bar, one was clipped for Sharp's Doom Bar, one was marked as St Austell Proper Job coming soon, and another was also marked as coming soon but without identification of the ale. A pint of lime and soda was 40p. Service was friendly but not particularly efficient — I had to wait for a staff member to appear from the back room when I went up to the bar a second time to order food, and breakfast dishes sat uncollected on a table behind me for the whole hour I was there.

According to their website as of August 2017, food is served every day, including breakfast until noon. In August 2017, Kake tried the vegetarian sausage and egg sandwich (£2.29) photo. It was OK — the bread was fine, and the sausage had a decent texture and wasn't too salty — but the egg yolk was solid and the sausage was slightly burnt.

They offer WiFi via O2, which is free but requires registration.

Accessibility: Step-free entry through the fire exit of the games room (though it's not clear whether this is kept open all the time). Once you're in, it's step-free to the bar, some of the seating, and the ladies' toilet (gents' not checked).