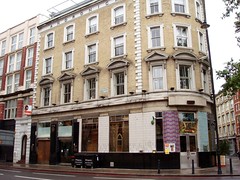 This site is now Floripa photo of it, still a Brazilian-themed bar/restaurant.

A Brazilian/French bar and club not far from Old Street Station, in Shoreditch. The original Favela Chic is in Paris.

This is a large and airy space decorated with an eclectic assortment of found art and knick-knacks, flowers and plants - in short, plenty of colour. Music policy is as you'd expect, a melange of styles in a danceable format, but all very listenable and not too loud - at least earlier in the evening when Ewan visited (on a Wednesday). Although not too busy at this time, it can get crowded and apparently there are extensive queues late at night on the weekend.

Food is served 7pm-10:30pm Tuesday to Sunday. Tables are laid out during this time, which are cleared away later in the evenings to make way for the club proper. They do a set menu, with three courses and only a couple of options for each (though one is vegetarian).

Food service is at the table, though they have a bar as well, where there's a small list of cocktails (caipirinhas and mojitos, served in old fashioned short glasses and perfectly good, at around £5), as well as Brahma beer (£3.50/bottle) and some wines.