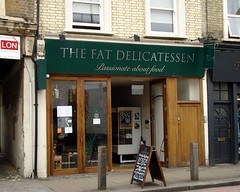 The Fat Delicatessen was a delicatessen and cafe/tapas bar in Balham, just around the corner from Balham Station. It has now closed; according to Google Street View, this happened some time between August 2012 and September 2014.

Delicatessen and cafe/tapas bar in Balham, just around the corner from Balham Station (take the exit signposted for Chestnut Grove).

It's a narrow space, running back into the building. One side is taken up by a display fridge and long deli counter, while the other has the seating — sofa/banquette seating near the front, giving way to upright chairs and blocky pale-wood tables further back. Right at the back there are five tall stools for eating at the counter.

The display fridge offers sandwiches and home-made ready meals such as shepherd's pie, while the deli counter offers a range of Spanish and English cheeses, charcuterie (e.g. San Daniele ham), and deli items (artichoke hearts and a couple of types of olives). A small selection of wine is also on display. The wall on the seating side is lined with shelves displaying pantry goods such as pickled walnuts, preserved lemons, jams, herb crackers, a small selection of flour, and (slightly oddly) Marmite and Worcestershire sauce.

The etiquette for eating in is that you seat yourself; staff will then come to your table to take your order. You can ask for the bill afterwards, but it's quicker to just get up and pay at the till.

Kake visited late on a Monday lunchtime in June 2009. There were plenty of tables available. Music interspersed with adverts was playing on the radio.

The food on offer is basically tapas. I went for teruel lomo (thinly-sliced ham, £5.50) and roasted red onions with chickpeas, baby spinach, and piquillo peppers, £5.25) photo, and accompanied them with some pan catalan (tomato-rubbed bread, £2) photo.

The lomo came glistening with fat; I don't know if this is a good sign, signifying good sourcing, or a bad one, signifying too-far-in-advance slicing. I enjoyed it, though; it had that "farmyard" tang that I really like.

The roasted red onions with chickpeas were great (though note that I'm biased in favour of this dish as it's the sort of thing I'd cook myself); the onions were roasted to a nice sweetness, the proportions of ingredients were well-balanced, and the dominant paprika flavour was enlivened with cumin. A minor criticism is that some of the onions were a little over-salted.

The pan catalan was a little oilier and crustier than I would really have liked, though I did enjoy the clearly-present garlic flavour.

Kake's verdict: A nice enough place for lunch. I might also give it a go in the evening if I happened to be in the area. Definitely on the gentrified side of things, but that might just be a general characteristic of the area.

Accessibility: A ramp to get in, and it's step-free throughout. The single toilet cubicle is a large, accessible one with grab bars, alarm cord, and so on, though on a June 2009 visit the paper towels were out of reach on a high shelf.