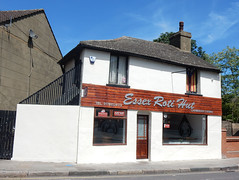 Caribbean restaurant in Rainham, very near Rainham Station. They also do takeaway and delivery, with online ordering via Hungry House and via Just Eat.

It has seating for about 40 at polished wood effect tables. Brick-style detailing adds interest to the plain white walls, echoed by the same facing on the small bar in the corner. Cakes sit under transparent domes on the bar counter, and tealights sit in chunky glass holders on the tables.

Kake visited on a Thursday lunchtime in June 2015. It was empty when I arrived, though a couple of other customers turned up while I was there. Service was friendly and helpful.

I went for the veggie ackee (£10) with rice and peas (£2.75) on the side; this arrived nicely plated up with a free side of steamed vegetables photo. There was a nice warming spiciness in the ackee, and plenty of chopped vegetables. This dish was not vegetarian, as it contained saltfish, but they warned me about this after I ordered. There was a good texture to the rice and peas, neither dry nor mushy. It was less coconutty (and hence less heavy) than I've had elsewhere. The steamed vegetables were fine, not overcooked, and a nice variety including mangetout and baby sweetcorn.

My bill wasn't itemised, but appeared to have had a 9% service charge added.

Kake's verdict: More expensive than I'd expected for a Caribbean restaurant right on the edge of London, but not inappropriately so given the food and ambience, and they do have some cheaper lunch deals. I'd come back if I was in the area.

Accessibility: A small step and then another slightly smaller one to get in. Toilets not checked.