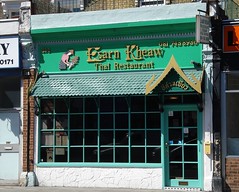 James and friend visited in late April 2009. We started with beef satay, which came with a homemade peanut butter like thing (in addition to the satay sauce). We also had the "Esarn Kheaw" homemade sausage which tasted a lot like a high quality English sausage.

Mains were beef massaman (the beef was amazingly tender and in a good gravy) with sticky rice (rice is sold separately and I'd recommend picking steamed instead, it allows the sauce to soak into the rice more) and red chicken curry (good, with delicious sauce) with steamed rice. The better meat was the beef, the better sauce was the curry.

Both of us had banana fritters for dessert which were simple and well-executed, served with a scoop of good vanilla ice cream.

Service was good, with the waiters being friendly, trying to crack jokes and everything being extremely efficient (starters only took 5 minutes to arrive).

A three course dinner for two, with two bottles of Perrier water, was £42.80 plus tip (there is no service charge on parties under 10 people).

James's verdict: The food was delicious, the service was very good and I'd certainly recommend it (and will be returning).

elvum and colleagues visited for a work lunch in June 2013. The "Esarn Kheaw" sausage was indeed high quality, with sour and fragrant flavourings. A main course of pork in the spicy north-eastern Thai style, with sticky rice, was spicy and sour; very good. We noted on this visit that there was a short fixed-price "express" lunch menu from noon until 3pm on weekdays containing dishes such as Phad Thai, for £7 per dish.