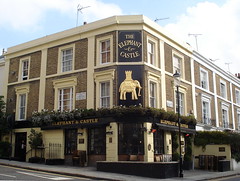 Nicholson's pub in Kensington, in the Good Beer Guide.

It's a small, cosy space, with seating for no more than 40 or so. Decor is traditional, with banquette seating and lots of dark wood, dominated by the central bar. Mounted in one corner is a flatscreen, and a fruit machine flashes silently by the door. A narrow passage leads back past the bar to an even smaller area with high stool seating for eight. There are also a few seats out the front on a tiny patio, separated from the pavement by a low wall.

Kake made a brief visit on a Friday morning in September 2014. One or two of the handpumps were off, but the others were clipped for Truman's Runner, Nicholson's Pale Ale, Oakham Inferno, and Exmoor Ale. (It's worth noting that I was there before the official opening time, so it's possible they were going to put more on.)

According to the Nicholson's website as of September 2014, food is served all day from opening until 10pm, from a chain-wide menu.

On an October 2018 visit Pride, Phuschia £2.55 a half, ilkley smoked witch £4.80, Nicholson's pale ale and doom bar were on. There were a few people outside and a few people at tables on an early Sunday evening. Finding a table was easy. Music was playing quietly but it got turned up.

Accessibility: A step to get in. No further steps once you're in. The passageway to the gents is quite narrow.