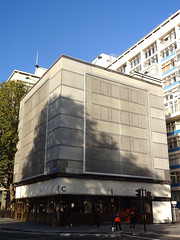 Antic pub on Newington Causeway at Elephant & Castle. It reopened under Antic's management in 2016 after a previous closure and revocation of its premises licence (see older version of this page for what it used to be like).

It does have something of an Antic look, but the dominant features of the room are the old-style seating — burgundy velour banquettes separated by carved wooden room dividers and shiny brass rails — and the exposed pipes and possibly-structural parts of the ceiling above. The floor is exposed wood, and the lighting is dim. There's a patio beer garden to one side.

Kake visited on a Monday evening in October 2016. There were quite a few people in when I arrived around 6pm, though still a few free tables. Retro music was playing, rather louder than ideal for conversation.

There were five real ales on, all brewed within London: Bexley Session, Southwark Gold, Southwark Potters' Fields Porter, Crate Amber Ale, and Antic's own Volden Juniper. A pint of blackcurrant and soda (they'd run out of lime cordial) was £1.

According to a sign outside in October 2016, food is served 5pm-10pm Mon-Thu, noon-10pm Fri-Sat, and noon-6pm Sun. Gluten-free, vegetarian, and veganable dishes are clearly marked on the menu photo. They also do bar snacks such as sausage rolls (both meat and vegetarian versions).

In October 2016, Kake tried the potato dumplings with roast squash, peas, and tarragon pesto (£9) photo. It was well-presented, but not particularly pleasant to eat. The peas were overcooked, and there was tough, chewy skin on the squash pieces. The dumplings were rather gluey. It was too oily overall, so the copious quantities of pine nuts weren't as welcome as they would have been otherwise. I ended up picking through it looking for bits I wanted to eat, and finding very few.

Service was friendly and helpful; when there was a slight delay preparing my drink I was told to take a seat and they'd bring it over to me.

Kake's verdict: I was pleased to see a porter on at the bar, and service was generally good, but the food was very disappointing and the interior feels a little too style-over-comfort for my taste. I might pop in again for a pint if I was passing.