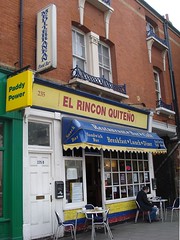 Ecuadorian cafe/restaurant in Holloway, just down from Holloway Road Station.

The Ecuadorian side of this place is not immediately apparent, unless you speak enough Spanish to recognise the name as referring to Quito, the capital city of Ecuador — at first glance it seems to be nothing more than a bog-standard sandwich-and-jacket-potato cafe/takeaway, with the usual counter display of sandwich fillings and things. Although a menu with Ecuadorian and other South American specialties is displayed in the window photo as of April 2009, once you get inside you have to ask for "the menu" explicitly, since the board up on the wall only lists the standard sandwich shop fare (plus breakfasts, including a vegetarian option).

Kake visited on a Monday late lunchtime in October 2009. When I arrived around 2pm, it was pretty busy, though there were still one or two tables free, and 10 minutes later it had emptied noticeably. Many of the customers seemed to be students from the nearby London Metropolitan University, and indeed there were signs on the walls advertising a student discount.

I know pretty much nothing about Ecuadorian food, and the menu very obviously included some non-Ecuadorian dishes (notably the pasta section, with lasagne and spaghetti bolognaise), but one of the staff was happy to go through the menu with me and make suggestions. I went for the menestra con carne asada y patacones (braised kidney beans with rump steak, fried plantains, rice, and fried egg £9.75) photo.

I was pleased to be asked how I wanted my steak cooked, and even more pleased when it actually arrived rare as requested. The fried egg was also well-executed, with a perfectly runny yolk. The plantain was fine, substantial without being stodgy. A fresh-tasting salsa also arrived in a small dish alongside the meal, with a nice bit of chilli heat but not an overwhelming amount. Perhaps the star of the meal, though, was the braised kidney beans; cooked just right to avoid the chalkiness of undercooking yet not overcooked to the point of falling apart, and flavoured nicely with small cubes of ham. These were perhaps the best kidney beans I've eaten in a long time.

They're open in the evening as well as the day, and don't seem to close in the afternoon. According to a couple of the reviews linked below, they're licensed, and sell beer at least.

Accessibility: Smallish step up to get in. The tables are packed in quite tightly, and to get to the toilets you need to squeeze around a very narrow corner.