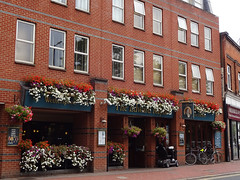 It's directly opposite the platforms of Raynes Park Station (though the station entrance is a little way along the road), and has a small amount of covered seating at the front for smokers and trainspotters.

It feels a bit less "shop conversion" than many Wetherspoonses; the low ceiling has various recesses instead of being a featureless slab, and while it initially looks like a single rectangular space, there are a couple of separate areas tucked away at the back. Walls are half-panelled, and mirrors have been installed on the surfaces of the large square pillars that break up the space.

Lighting is dim, and the usual patterned carpet covers the floor. Framed display boards on the walls offer snippets of local history, and a couple of bookshelves in an alcove hold a surprisingly decent selection of paperbacks.

Kake visited on a Tuesday afternoon in September 2019. There were a fair few people in when I arrived a little before 1pm, a couple of them working on laptops, and apparently none of them eating lunch. No music was playing, as is usual for Wetherspoons, but there was a good buzz of conversation. Service was friendly.

Child-friendliness: As in most Wetherspoonses, children are welcome during the day. There's a pull-down nappy change and a nappy bin in the accessible toilet (requires RADAR key from behind the bar).

Accessibility: No steps to get in. RADAR-locked accessible toilet on the level. Other toilets are down a flight of stairs in the basement.