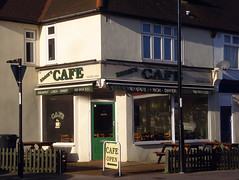 It seats 38 people inside at sturdy wooden tables and chairs, and there are also three picnic tables out the front plus a rear garden which could seat ten more. Newspapers are available for customers to read.

bob visited on a Wednesday lunchtime in August 2016. There were nine other customers when I arrived a little after 1:30pm, and two more turned up while I was there. A menu was brought to me, and my order was taken at my table.

I went for Ed's Big Breakfast (£6.45) with extra egg, hash browns, and black pudding photo. The chips, bread, and tinned tomatoes were fine. The mushrooms were deep-fried, and had been left to cook a little too long. The sausage was disappointing. The hash browns were quite large but also quite greasy. The beans had too much sauce for my taste, and the bacon was a touch too salty.

However, the eggs were cooked perfectly, with nicely runny yolks photo, and the black pudding was also well-handled, with a crisp exterior and soft interior.