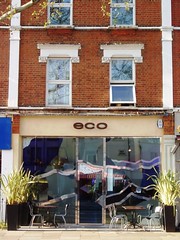 Eco was a pizza place on Chiswick High Road. It closed some time in 2009. As of December 2009, the site is occupied by the second branch of Franco Manca, SW9 8LD (see Andy Hayler's review).

The information below is retained for people who want to know what it was like as Eco.

Decent pizza place in Chiswick. They have another branch (the original one) in Clapham.

Bob and Jack visited on a Monday lunchtime in December 2008. We were the only customers. bob had the piccante pizza (£9) with extra anchovies (£1.20) photo. The base was thin, the cheese was good, and the anchovies were great. They also put garlic oil on, which was quite tasty. The chilli oil was almost hot enough. Jack had the aubergine and sun-dried tomato pizza photo, and thought it was very tasty.