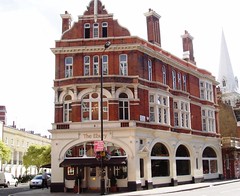 The Ebury was a sort-of gastropub, sort-of restaurant in Pimlico. It closed down in late 2012. As of 2016 the premises are occupied by a bar and restaurant called 11 Pimlico Road.

As the boundaries between pub and restaurant continue to blur, finer and finer gradations become apparent. The Ebury is not quite a gastropub, yet it's not quite a restaurant either; the London Pride is well-kept, and it's perfectly possible to come in for just a drink.

The ground floor is a single large room. Tables are laid with white cloths, cutlery, and wine glasses, and large glass windows let the sunlight in and provide a decent view onto the fairly peaceful Pimlico Road. A curved staircase at the end of the room sweeps up to the first floor, where the toilets and a second dining room are located.

Kake visited on a Friday evening in August 2008. I was on the early side for dinner, arriving pretty much bang on the dot of 6pm, and the place remained fairly quiet throughout my visit. The only real ale was London Pride (£1.60/half), but it was perfectly fine.

Decent enough bread (a sourdough with a substantial, chewy crust) and butter arrived at my table shortly after I sat down (this was complimentary; no cover charge was applied). There was no problem at all with me asking for two starters rather than a starter plus main, and there was also no problem with my request for tap water; a jugful was provided along with ice.

My first starter was gazpacho (£6) photo, which was just fine; though I prefer the chunkier versions of gazpacho, this smoother rendering worked well, and the garnishes of olive oil, fresh herbs, and creme fraiche added to the flavour as well as the appearance. My "main" (second starter) was goat cheese pannacotta with beetroot tarte fine (£6.75) photo; again good, and a nice twist on the classic combination of goat cheese and beetroot. The strong flavour of the goat cheese was toned down just the right amount by being used as pannacotta (which is basically a dairy-based set "pudding" normally seen in sweet rather than savoury versions).

They have several wines by the glass, served in 175ml and 250ml versions. My chenin blanc (£6.75 for 250ml) was in the middle of the by-glass price range, and although I don't know much about wine, I do know that I liked this one.

Kake's verdict: Part of the reason I enjoyed my meal so much was that I was in a good mood anyway and the place wasn't crowded, so I'm a little wary of coming back in case of disappointment! But overall, yes, I'd eat here again. I might even come here on purpose, but then it's fairly easy to get to from my house.