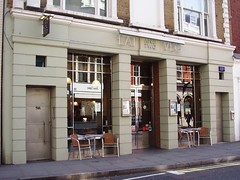 Eat and Two Veg was a totally vegetarian American-style diner on Marylebone High Street. It closed in December 2009, and reopened in May 2010 as a European brasserie, Cafe Luc.

They offer vegan breakfasts, and also have several vegan options on the menu. The drinks menu is extensive, including a selection of cocktails, both alcoholic and non-alcoholic.

Ewan et al. visited in May 2008 as a large party on a Bank Holiday Monday afternoon. Service was friendly and they happily brought jugs of tap water for the whole table. The EatV Cheeseburger (£8.50) photo was a popular option (they also have a double cheeseburger for around £10.50 on the menu — the actual bun isn't huge so if hungry it may be possible to get through one of these!). The vegetable protein patty tasted excellent, and it was served with stringy fries, salad and coleslaw (though the latter wasn't quite so well-received). There was also a similar burger with a slice of butternut squash and a large portobello mushroom instead. Bec had the schnitzel with mash (around £10), which was also excellent. Likewise, the halloumi sandwich (£8) got positive comment.

A commenter called Chris P notes that the Christmas dinner he tried in December 2007 was a not-very-exciting nut roast (he much preferred the nut roast at the Pembury Tavern), and although he'd give this place another go, he'd choose one of their standard dishes next time, not a special.