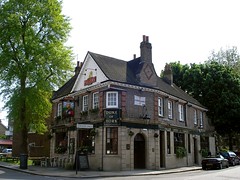 The Duke of York was a Fuller's pub in Chiswick. According to the Oct/Nov 2017 London Drinker, it has now closed.

Fuller's pub in Chiswick, on the corner of Devonshire Road and Fraser Street.

Has a pool table and a jukebox.

According to Fuller's website as of June 2012, food is served noon-9pm Mon-Sun. A blackboard seen outside in May 2008 advertised "today's special — roast chicken, new potatoes, and salad £5.50" and "fresh sandwiches from £2".

bob went for lunch on a Tuesday afternoon in November 2008 and had the scampi (£5 including chips, peas, and coleslaw) photo, which was fine. A pint of lemonade and lime was £2.