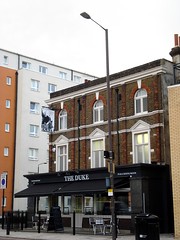 Modern-style pub on Creek Road in Deptford, refurbished and reopened in October 2008. It's run by the same people as the Dolphin in Sydenham.

The interior is really quite nice; gastropub-style, yes, but a more modern kind of gastro. Rather than relying on identikit shabby-chic cliches, obvious effort and good taste has been put into the design, with black, white, and olive green decor accented effectively by the lime green cushions on the two small sofas by the front windows.

Kake visited on a Wednesday afternoon in October 2008. Two of the three handpumps were in action, offering Tim Taylor Landlord (£3.20/pint) and Brakspear bitter. They also had Leffe and Bulmers cider on tap, among other things.

I was too early to get proper food, but there was a fair selection of bar snacks available; examples included wasabi nuts (£2), baba ganoush, tapenade, and hummous platter with flatbread (£4.80), and cured Iberico meats with organic dripping, toast, and gherkins (£8.50). I tried the onion rings (£2), which were great; whole rings of red onion in a non-greasy batter that was not only crisp on arrival but also stayed crisp until I'd finished them.

I'd like to come back and give the food a proper try; if it's up to the standard of their sister pub, the Dolphin, it's going to be good.

According to the Duke mailing list, from 19 January 2009 there will be a quiz night every Monday from 7pm.

Accessibility: Toilets are up a flight of stairs with a landing and a bend in the middle. Diabled toilet on the ground floor, you may have to ask the staff for a key. Front entrance has a shallow ramp. Side entrance has at least one step.