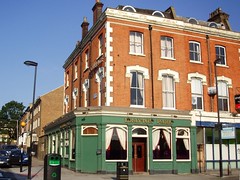 It's divided into two halves, though there's an internal connecting door between them. The lounge side has traditional decor, with burgundy banquette seating, a patterned carpet, and a TV lodged up in one corner against the ceiling. The other side has a pool table and dartboard.

Kake and Mark visited on a Tuesday afternoon in April 2010. There was no real ale, but a pint each of Strongbow and Kronenbourg came to £5.70.

The landlord was extremely friendly and welcoming, and not only remembered what we were drinking when we came up for a second round, but brought the drinks over to us so we didn't have to wait at the bar while he finished serving someone else.

It was relatively quiet during our visit, with an initial half-dozen customers growing to a round dozen as it got to post-work time and a football match started on the TV. However, the pub's proximity to the football ground means that it'll be packed out when Arsenal are playing at home photo, and indeed there was a sign on the wall warning that on match days it's plastic glasses only.

Kake's verdict: Although initially it looked like this was going to be another one of those locals' pubs with nothing to distinguish it from any other, the landlord was such a nice chap that I'd come back for that aspect alone, if I happened to be in the area. Though perhaps not on a match day.

Accessibility: Step-free access to the lounge bar, but the ladies' is up two steps from here. One step up at the public bar entrance, and step-free (though somewhat narrow) access to the gents' from here. There's one step between the two bars.