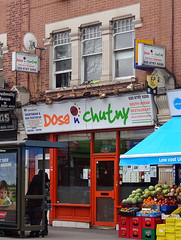 South Indian cafe near Tooting Broadway station in Tooting. As you'd guess from the name, it specialises in dosas served with chutney (and sambar). There used to be another one in Croydon, but that has now closed.

secretlondon popped in after work in March 2016 for a curry fix. I had idly (£2.20), mixed uthappam (£3.90), and gulub jaman with ice cream (£3.90). Both of the savoury dishes came with the same three sides — sambar, coconut chutney, and a couple of chutneys (I think) in the same container. My uthappam was pretty hot, with green chilli on. I'm normally pretty good with chilli, but I had to pick the chillis off as it was too hot.

The only disappointment was the dessert. One small piece of gulub jaman and one scoop of uninteresting vanilla ice cream. I won't have that again!