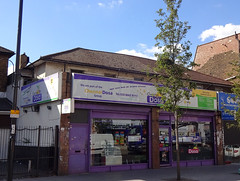 Casual cafe-style South Indian restaurant in West Croydon. They also do takeaway and delivery, with online ordering via Just Eat.

It was previously known as Chennai Dosa (pictured), but changed its name to Dosa Kada in mid-2020. According to a post on Facebook it has the same chef and same management, but we haven't visited since the change, so some of the details below may be out of date.

It's on two levels, with seating for 20 or so diners on the lower level and another 50 on the upper. The lower level is also home to a fresh juice station as well as the buffet station, used at lunchtimes and for weekend breakfasts. Chairs are black pleather, floor tiles and tabletops are polished variegated grey, and walls are papered in a fake-stonework design.

We had mushroom 65 on two visits in August 2019 (£5.25) photo of the second time; both times the spicing was really good, with black salt adding the final touch, but while the batter was beautifully crisp on our first visit it was unfortunately rather softer on our second.

Samosa chaat (£5.50 in Aug 2019) photo was nicely substantial, and the tamarind chutney and yogurt sauce added plenty of flavour. The little crispy bits on top were fresh and properly crispy, and sliced green chillies provided heat.

Masala tea (£1.75 in Aug 2019) photo was good, with well-balanced spicing, just the right amount of creamy milk, and not pre-sweetened (though be warned that on our breakfast buffet visit it was sweetened, and far too much so for our taste).

Accessibility: A small step to get in (only about an inch), but more steps (with handrail) to toilets, handwash area, and upper seating level.