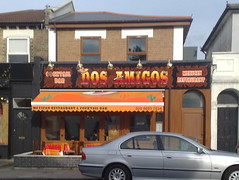 Dos Amigos was a Mexican restaurant on Lordship Lane in East Dulwich. It has now closed. As of early 2012, the premises are occupied by a Mediterranean restaurant called Koz.

Mexican restaurant on Lordship Lane in East Dulwich. It's part of a small chain; there's [another one]? in Beckenham.

secretlondon visited one Saturday afternoon in May 2009. I had a chimichanga with spiced chicken (£9) photo which was a deep fried stuffed tortilla with rice and salad. They had a very poor selection of soft drinks — just mainstream fizzy drinks or some fruit juices. I had a glass of diet coke (£1.40). The food arrived very quickly (too quickly?) which suggests it was mostly pre-prepared. It was 5 to 10 minutes max from ordering to being on my table. I heard a 'beep' about a minute before it arrived which might have been a microwave. The rice was suspiciously uniformly yellow and the chimichanga unexciting. The salsa wasn't particularly hot and I overheard a waiter tell another table that they've toned down the spice in the food after complaints.

There is outside seating so I presume you could smoke if you wanted to. I suspect this place is known for its booze not its authenticity.

Accessibility: There are two small ledges to negotiate and a little ramp from street level. However the toilet looks fully accessible with bars, alarms, braille etc.