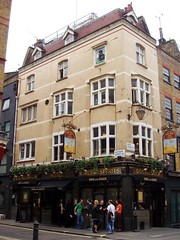 Although featuring some very attractive historical tiling inside, this is a very small pub. The bar takes up around half of the downstairs space, and at the rear is space for about four small tables. They have an upstairs bar photo, the George Orwell Room (named for a famous habitué of the past), which is advertised as a dining room but which they are happy for visitors to sit in with just a drink. It has comfortable banquette seating and tables which can seat around 20 people in total, though the space is still fairly cramped.

There are six handpulls downstairs, four of which are in use, dispensing London Pride and Timothy Taylor's Landlord (also available on the two handpulls upstairs), as well as a regularly changing array of guests, which in August 2009 were St Austell IPA and Jenning's Cumberland Ale, replaced during the evening with Woodforde's Sundew. All ales are well-kept and priced at £2.90 a pint, though the Pride is £2.60. There are also draught taps for Staropramen, Amstel and Addlestone's cider, amongst others.

Food is served every day noon-9pm, from a standard Nicholson's menu. There's a page dedicated to the sausages (although a lot of them were off on Ewan's August 2009 visit). Food was fairly average; Ewan's vegetarian sausages were good quality, but the mash tasted bland and artificial, and the watery gravy overwhelmed the plate photo. A chicken burger received some compliments, however.

Accessibility: Gentlemen's toilets are down some very narrow stairs at the back, and ladies are upstairs. There is in general very little space in this pub.