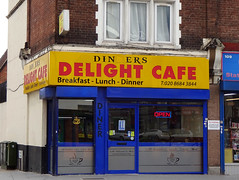 It seats around 30-35 at tables for 2-4 people each. Tables and chairs are freestanding on a tiled floor. The walls are painted a deep pink/red, and decorated with pictures including a large painting of flowers. A mirror on one wall makes the place feel a bit less small.

Kake visited on a Saturday lunchtime in June 2013. There was a fair bit of turnover during my visit, meaning there were always tables free though the place wasn't empty by any means. A small flatscreen mounted high in one corner was playing music videos with the sound on, but not too loud.

I had the veggie breakfast (£4.90 for egg, hash brown, mushrooms, bubble, and beans) with added black pudding (80p) photo. The fried egg had a nicely runny yolk, and the white wasn't overcooked either. The mushrooms were well-browned, as was the bubble. The black pudding was OK without being outstanding, and was a little salty for my taste. A cup of tea ordered "very weak" did indeed come weak as requested. The "2 slices of bread" advertised as coming with the set breakfasts never turned up (I didn't notice until afterwards that this was included, so didn't ask).

DrHyde's verdict: A wonderful greasy spoon. Breakfasts are big, cheap and unhealthy, the tables are suitably formica-ish, the decorations on the walls cheap and tacky. What more could you want?

Kake's verdict: It's fine for what it is.

Accessibility: No steps to get in. Chairs and tables are freestanding, not fixed to the floor (or each other). Two steps to get to the toilet (a single unisex cubicle).