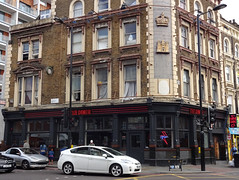 Branch of the American diner chain, very close to Dalston Junction Overground station. The chain now has several branches across Central London including one in Shoreditch and one in Soho.

Kat has visited on two separate occasions, both weekday evenings at around 7pm. It felt fairly relaxed then but can get very busy at weekends and I'd advise booking for Friday or Saturday nights. It's much smaller than the Soho and Essex Road branches, but the booth-seating layout makes sensible use of the space, and with only a couple of stools at the bar it doesn't feel too cramped. Service has always been friendly, although the music playlists can be rather questionable - on Kat's last visit the most obvious of 90s rock tunes were playing at an unignorable volume (but not too loud to hear conversation).

There is an extensive drinks menu including a large number of imported American bottled beers, and alcoholic milkshakes (a decent option for pudding). It's not cheap though: a 330ml can of Camden Pale Ale was £4.50, a bottle of Rogue Amber Ale was £6. The food menu is exactly the same as the other Diner branches - Kat's go-to choice when very hungry is the baby back ribs (£12), which come with fries and coleslaw included, and a side of macaroni cheese (£4).

Kat's verdict: a decent source of macaroni cheese in a handy location, but it feels bit more expensive than it should be. Overall I prefer the atmosphere of the Soho branch.