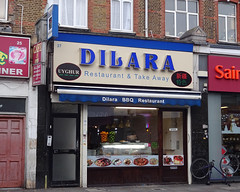 Entry is into what looks like a standard kebab shop, with a glass-fronted service counter and a backlit menu behind. Further back, however, are tables for around 60 people, including a long communal one in the centre. The walls are covered in stone wall effect wallpaper, the floor is marbled brown tiles, and chandelier-style lighting hangs from the low, plain-painted ceiling.

Kake has visited twice now, on Thursday lunchtimes in June and August 2018. There were just four other eat-in customers when I arrived shortly after noon on my first visit, but another half-dozen turned up while I was there, and there were also several people in and out for kebab takeaways from the front counter. No music was playing. The situation was similar on my second visit, which took place around the same time of day.

In June 2018 I ordered the marjan korumisi (stirfried chopped noodles/丁丁炒麵/dīng dīng chǎo miàn; £8) photo. This was advertised on the menu as coming with beef, but actually came with lamb instead; this may have been related to the questions the party at the table next to mine were asking the waiter after their food arrived (they were speaking Mandarin, and the only parts I could understand were frequent mentions of chicken, beef, and lamb).

In any case, I prefer lamb to beef, and the dish was pretty good. The meat had a satisfyingly lamby flavour, and was cooked rare. The thick noodles, chopped into short cubical lengths, were pleasingly chewy. There were hints of sweetness and chilli heat in the sauce, but not too much of either, and balanced by plenty of umami. There was just the right amount of oiliness. Mild red and green chillies in varying degrees of doneness added textural interest and a hint of bitterness, and the onions and spring onions were well fried to a brownish sweetness. The meat was relatively sparse in relation to the noodles, which suited me fine, but meat lovers might wish to order a skewer or two of lamb on the side.

In August 2018, tugur (boiled dumplings; £6) photo were somewhat disappointing. The wrappers were OK (though a few of them had torn and let the water in), but the meat inside was very tough and gristly, and not in a good way. The accompanying black vinegar and chilli oil dip was essential to liven them up. Uyghur salad (£3) photo was much better; a really good blend of sour, spicy, and umami, with a hint of sesame. The carrot shreds were the main component, and were crisp and refreshing.

It wasn't entirely easy to get the attention of the staff, and it also wasn't clear whether to ask for the bill or pay at the front (I did the latter, and they didn't seem to mind). Service was generally friendly, though, and they seemed very pleased that I liked the food. I had to ask twice for tap water on my first visit, but an unsolicited glass of black tea turned up shortly after I ordered (unsweetened, with sugar provided on the side), and a small dome of syrup-soaked sponge cake arrived after I finished; no charge was made on the bill for either of these, and no service charge was added. (On my second visit, tap water came straight away but there was no free tea or cake.)

Kake's verdict: I'd not order those dumplings again, but I'm keen to come back and try more of the menu (and eat that salad again).

Accessibility: A step to get in. No steps to toilets, but cubicle a bit narrow.