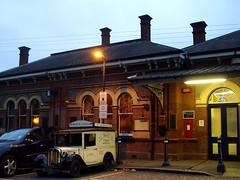 It's right next to Chislehurst Station — in fact, it's located in the station's former waiting room. Because of this, it's quite small; the main room on the ground floor seats no more than 30, though there are a couple of four-tops out the back and another large table on the mezzanine.

Kake and bob visited on a Sunday Bank Holiday evening in 2009. We were lucky to get in; they'd locked the doors because they were pretty much full to capacity, but since there were only two of us they managed to squeeze us in.

Kake started with half a dozen oysters (£7) photo; nothing wrong with these at all, and I'd happily order them again. bob had the calamaries (£5) photo; these were very good, cooked just right (and bob is very fussy about his squid).

Our mains were less exciting; we both went for plainly cooked fish steaks, tuna (£14 including side vegetables) for Kake and swordfish (£14.50 including side vegetables) for bob photo. Kake asked for the tuna to be cooked rare, and was assured by the waiter that they always did it rare — the end result was not quite as expected though, since the steak was rather thin and so ended up overcooked except in the very middle. There was also a certain amount of what appeared to be pre-prepared frozen parsley scattered over the dish, which didn't enhance it at all. The side vegetables also suffered from the parsley problem, though were fine otherwise.

Music was playing throughout our visit, mostly Frank Sinatra.

Kake's verdict: I'd come back if I was in the area; I don't think I'd order such a plain main course again (too easy to get wrong) but I'd like to give some of the more complex dishes a go.