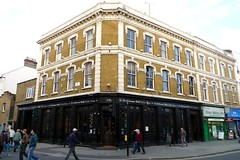 This strangely named pub (is "weld" a verb? or is there an apostropherror?) has pretensions. It is "inspired by the spies of yonder years" (yonder?!?!) and boasts on its website about cocktails.

Despite this, it's actually a pretty decent pub. There are four handpumps for real ale, and the Brains SA that DrHyde had on his September 2010 visit was fine. There's apparently some kind of "club" on Fridays and Saturdays, but mid-week it's busy but not over-crowded, and you don't have to shout to have a conversation.