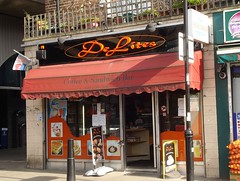 Small halal British and Bengali cafe in Shadwell, in between the DLR and London Overground stations.

It's a small space, with seating for just 12 people. The dark red of the plain-painted walls is echoed in the tall pleather seats and Formica-topped tables, in contrast to the light grey tiles of the floor. A glass-fronted service counter runs along the side of the room, with sandwich fillings, samosas, and soft drinks on display. Orders are taken at the counter, food is brought to your table, and you pay at the counter afterwards.

Kake visited on a Friday lunchtime in February 2017. There were four or five other customers in when I arrived around 1pm, and others were in and out while I was there. No music was playing.

I went for their Friday special of chicken biryani (£5) photo. There was a good balance of meat to rice, and the meat was flavourful and not dry at all. Pieces of well-cooked and well-seasoned potatoes were also included. Unfortunately the rice was overcooked to my taste, and a little mushy. A thin but tasty bowl of dal was provided on the side, flecked with whole spices and chopped greens.

Tap water arrived swiftly on request. No service charge was added to the bill.

Note that as of February 2017 it's cash only; however, there's a cashpoint just across the road next to the entrance to the London Overground station.

Accessibility: A step to get in. No customer toilet.