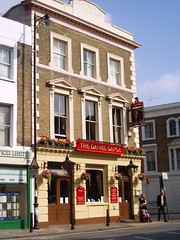 Pub in Stoke Newington which closed in summer 2015. The pub is set to reopen as the 'Stoke Newington Tea House' in December 2015 according to the new website. The information below is kept for historical interest.

There seems to have been a change of management some time in 2007. As of January 2008, they had a pretty good range of ales (usually about four on the hand pumps; one example is Tribute) and draft lagers including Kirin and Red Stripe. [Katie]? noticed some single malts behind the bar but can't remember exactly what they were. They sell scampi fries and bacon fries. Two pints and a couple of bags of crisps/scampi fries were about £7.

The clientele was mainly youngish trendy Stokeyites, not as filled with kiddies as other pubs in the area, and it didn't seem to be as busy on a weekday evening as, say, the Three Crowns further up Church Street.

Menu was very much of the gourmet burger/monkfish and parma ham/asparagus risotto variety, with mains costing about £8-9 on average. Four (I think) vegetarian choices, all pretty heavy on the cheese and eggs, so not very vegan-friendly. (Food serving times as of July 2007 were 4pm-9:30pm Mon-Fri and noon-7:30pm Sat-Sun; not sure if this predates or postdates the management change --Kake.)

According to an anonymous commenter as of January 2011, quiz night is Monday at 8pm.

They have a beer garden with a canopied smoking area (confirmed by email, July 2007).