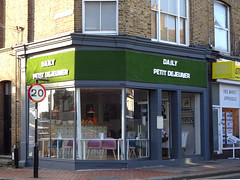 British and Lebanese cafe in South Norwood. It opened in mid-2019.

It's open early for breakfast, and towards the weekend stays open into the evenings too, with BYOB permitted.

The interior is small, with seating for just 20 people. Twelve silver plush velvet chairs are arranged at three rectangular tables, half a dozen pastel plush velvet chairs line up along low counter-style seating at the windows, and a sofa sits behind a low coffee table at the back. Windows on two sides offer ample bus-watching opportunities.

In one corner is a service counter with attractive patterned tiling on the front and a small open kitchen behind, including a pizza oven which is used to bake flatbread as well as pizzas.

Kake visited on a Friday morning in September 2019. There were two other customers when I arrived around 8:45am, and others were in and out while I was there; by 10am it was quite lively. Music was playing quietly.

Eggs benedict (£5.90) photo was a decent effort. The eggs had a uniform shape suggesting they were done in a microwave, but done competently; the whites were set and the yolks were runny. The ham was turkey ham, dry-fried to give it a little more character. The hollandaise was very smooth and had a reasonable level of acidity, but lacked character somehow. The muffin was rather thin and small, which put the whole thing a little out of proportion. Overall, it was fine, but I really wished for more of the muffin component.

They have WiFi — ask staff for the network name and password.

Accessibility: A large step to get in. The chairs at the actual tables are quite uncomfortable, with hard ridges that dig into you, but those at the (normal-height) "counter" seating around the windows are more forgiving. Another step to the toilet, which is accessed through the kitchen.