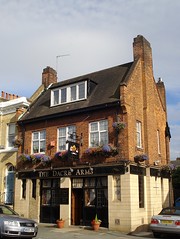 It's quite small and cosy inside. There's a patterned carpet on the floor, decorative ceramic plates mounted on the walls, and various other bits of tat around. The top of the bar is decorated with hops. Barstools and a bit of standing room surround the bar, and there are wooden panelled dividers jutting out from the wall opposite to make a number of booths lined with banquettes and mini armchairs, all upholstered in the same diamond-pattern fabric. Small round polished-wood tables are dotted about. It almost has the feel of being someone's living room, and there's even a pub dog.

There's a beer garden out the back, where smoking is permitted. They don't serve food at all, but (at least as of November 2008) they do stock Twiglets and Cheese Moments (70p). They had sold out of pork scratchings on our visit.

Kake, Ewan, bob, secretlondon, and several others visited on a Sunday evening in November 2008. There were about 20 or so people in when we arrived at 5pm; all the tables had someone at, but there were seats left. Music was playing very quietly and mostly drowned out by conversation. Real ales available were Harveys Sussex Best (£2.90/pint), Greene King IPA, and Courage Best (£2.60/pint), though the Harveys ran out during our visit. The other pumps had turned-around clips for Deuchars IPA and Tim Taylor Landlord. They also had mini bottles of wine. Most disturbingly the mini bottles of Mateus Rose.

On Kake's Wednesday late-afternoon visit in July 2010, the ales were Courage Best, Greene King IPA, Doom Bar (£1.55/half), Spitfire, and Bombardier. There were several other customers but plenty of space, at least inside (it was a nice day and quite a few people were in the beer garden). Classic FM was playing.

On another Wednesday visit in February 2011, there were only three or four other customers at 6:15pm, and although a few more arrived over the next hour, there were always free tables. Real ales were Courage Best, Greene King IPA, Doom Bar, Bombardier, and one other. Heart Radio was playing, but not annoyingly loud.

Accessibility: The pavement outside is a bit uneven, and there's a step up to get in. It's stepfree to the ladies' once you're in, but access may be obstructed somewhat by the arrangement of the furniture, and even once you're in there it's a bit of a tight squeeze to get into the cubicles. Not sure about access to the gents'. There's a step down to get into the beer garden at all, and a step back up to get to the majority of the beer garden seating.