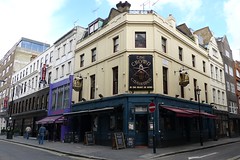 The downstairs has an open-plan bit plus a few tables in a little hidey-away bit to the side of the bar. There's also a lounge upstairs with sofas, cushions, and even a standard lamp and recliner chair. There's a bar in the upstairs lounge, but it's not always staffed.

Judging by our several visits so far, it's much more pleasant in the afternoons than in the evenings. On a lunchtime visit in March 2008, it was almost empty at 12:30pm, though the place started filling up while we were eating. Evenings can be somewhat grim; very crowded, and the music turned up loud so people have to shout at each other, still the case on a visit in February 2010, although there were at least tables available. When football is being shown in the upstairs lounge, the crowding is even worse; however, on non-football nights the upstairs area can be completely empty even when the downstairs is standing-room only, so it's always worth checking up there.

Food is served noon-10pm Monday to Saturday, and noon-9pm Sunday. As well as bar snacks such as wasabi peas and pistachio nuts, they offer a varied and interesting-looking food menu, which seems to change quite often (so specific menu items mentioned below will quite possibly not be available any more).

On the March 2008 menu, mains ranged from £6.90 to £9.90, including several vegetarian options and some that looked potentially vegan. Platters and sharing dishes (only served after 5pm) offered things like olives, hummous, baba ganoush, pitta bread, falafel, wedges, etc, with one item priced at £3.50, three at £9, and five at £11. There was also a selection of desserts, all at £3.50. We've also previously spotted a cheese board at £5.50.

In May 2007, Kake tried one of the "light bites", smoked trout served with horseradish cream and buttered brown bread (£4.90); it was rather good, and not an insubstantial portion.

On a lunchtime visit in March 2008, Ewan had the grilled halloumi with couscous and roast vegetables (£7.90) photo, which was very tasty, with expertly grilled halloumi, though the vegetables (aubergine and courgette) were a little dry and tasteless. Alice's toad-in-the-hole (£8.50) also got a positive review (though it was actually a huge yorkshire pudding with bangers and mash inside, rather than normal toad-in-the-hole). Bec's lentil and spinach veggie burger (£6.90) photo was massive and lovely. Very garlicky and not at all dry, which is where some veggie burgers go wrong. It came with massive fat chips and sour cream/mild salsa for dipping.

DrHyde comments: while the burgers and chips are a good size, some of the other dishes are decidedly miserly.

Accessibility: One step up to get in. Toilets are upstairs. As mentioned above, it can get very noisy.