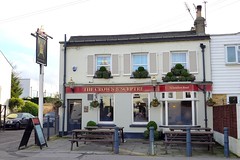 Entrance is into the main bar area, with standing room around to the right and a booth-lined corridor to the left leading on to a back room with more chairs and tables photo. There's outdoor seating at front and back.

There are at least six handpumps on the bar, serving Fuller's ales plus at least one guest. A display of old pump clips behind the bar reveals that the guest ales cover a fairly wide range. When Kake visited in April 2013, the guest was Tomos Watkins OSB. When bob visited in September 2016, the ales were London Pride (£3.90/pint), Seafarers, ESB, and the guest: York Otherside IPA (£4/pint).

When Kake and several others visited on a Friday evening in April 2013, it was quite full when we arrived around 6:15pm, with drinkers lining the bar, though there were tables free in the back room. An hour later it was packed, but some of our party (who'd been here many times before) noted that it isn't always this busy, even on a Friday. Service was friendly despite being busy.

According to a sign seen in September 2016, food is served noon-3pm and 6pm-9pm Mon-Fri, and noon-6pm Sat/Sun/Bank Hol. As well as the regular menu, they usually have a couple of specials written up on a chalkboard photo of example in September 2016.

In April 2013, Kake's chicken and bacon sandwich was very generously filled, and served with a mixture of perfectly fresh salad leaves, cucumber, and tomatoes. The macaroni cheese ordered by another of our party looked good, too, with plenty of sauce and apparently a good dollop of mustard included to give it zing.

In September 2016, bob had the all day brunch (£7.25) photo. The mushrooms were overcooked, but the grilled tomatoes were fine, the sausage was pretty good, the bacon was full of flavour and cooked well, and the eggs were perfect photo. A side order of curly fries photo was £2.50.

According to a sign seen in September 2016, quiz night is Thursday from 9pm.

Accessibility: A step to get in, and it's fairly cramped inside when full. Once you're in, it's level to the toilets, including a RADAR-locked accessible one.