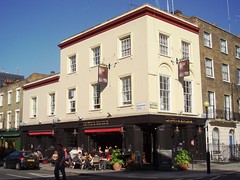 A popular pub on Drummond Street near Euston Station. It's part of the Mitchells & Butlers Castle sub-chain.

On weekdays after work, it's noticeable just how busy this place gets with local office workers, and the atmosphere tends towards the style bar end of the pub spectrum. There are tables alongside the bar stretching down to a larger area at the back, with a couple of booths with banquette seating and some larger tables. One side of the rear area is under a skylight so has a bit of natural light, but mostly the pub is fairly dark (only helped by the low ceiling and dark colour scheme with flashes of neon lighting and modern artwork). There's a fireplace down the rear of the pub, but as the visit on which we noticed this was during a warm Autumn's evening, it wasn't going.

Despite the "style bar" atmosphere, there are a number of handpulls for ale at the bar. On Ewan's September 2009 visit these offered London Pride, Black Sheep Bitter (£3/pint), and a guest ale of Merlin's Oak (with a hand-drawn pump clip), all well-kept, although some of the staff didn't seem so familiar with dispensing them. Draught lagers included Sierra Nevada, Red Stripe, Hoegaarden, Leffe, Staropramen, Peroni and others. On bob's December 2009 visit the guest ale was £3 and pretty drinkable. On Kake's August 2013 visit, the ales were Stonehenge Eye Opener (£1.90/half), Hop Back Summer Lighning, Bath Ales Summer's Hare, and Purity Mad Goose.

On a Friday evening in September 2009, music was playing, but drowned out by the noise of conversation. On a Friday evening in December 2009, the pub was again quite busy although we did find a table with no chairs. On a Tuesday evening in August 2013 it wasn't too full at 5:15pm, partly because the weather was good and a lot of people chose to drink outside, but there was an influx around 5:30pm and practically no seats left inside by 5:45pm.

Food is served noon-10pm Monday to Saturday, and noon-9pm on Sunday.

According to a sign behind the bar in August 2013, quiz night is Monday from 7pm.