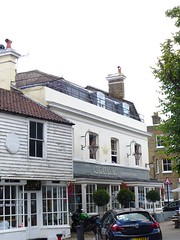 It was refurbished in early 2011. Now, it's quite spacious inside, with polished floorboards, pale walls, and a long bar. A small room towards the back is fitted out like a library, with matching bound books, a fireplace with beer bottles displayed on the mantelpiece, and a leather banquette along one wall with small, decorative velvet cushions. There's a fair bit of seating out the front of the pub too, though it's not covered.

Kake visited on a Thursday afternoon in May 2011, shortly after the pub reopened following its refurbishment. There were four real ales on, all Shepherd Neame: Early Bird, Spitfire, Kent's Best, and Bishop's Finger. There was also a reversed clip for another Shepherd Neame ale, Canterbury Jack. Lime and soda was an impressively cheap 45p/pint, and service was still friendly and helpful even though I was spending such a tiny amount of money.

There were quite a lot of people in when I arrived at 3:45pm; far more than in the Railway further down past the station. All of the outside tables were full, though there was space inside. Several of the customers were parents with babies. Music was playing, though not too loud.

According to the Crown website as of May 2011, food is served noon-9pm Mon-Thu; noon-7pm Fri-Sat; and noon-9pm Sun.

Accessibility: No step to get in, and the ground floor is all on one level once you're in. There's an accessible toilet towards the back of the ground floor, also incorporating baby change facilities.