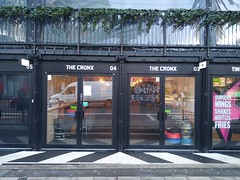 The Cronx Bar was a bar in a temporary structure made of shipping containers next to East Croydon Station. It closed down for good in September 2021, with the owners stating that due to "several factors, as well as the coronavirus pandemic" they had decided not to renew their lease when it expired.

Bar in a temporary structure made of shipping containers next to East Croydon Station, in the Good Beer Guide.

Although it's part of the Boxpark development, the entrance is on Dingwall Road.

It's quite small inside, and there's minimal seating. The bar is at the back, filling the full width of the container. To one side are four small tables with banquette seating and stools made from beer barrels, while along the other side is a drinking shelf flanked by seven high stools. Two posts with more drinking shelves are in the middle to stand around. The look is very industrial, and there are lots of power sockets with USB outlets as well as normal plug sockets photo. The use of old dispense units and lamps is quite interesting.

On a Wednesday evening in August 2017, when bob arrived at 6pm there were about 15 people in and nowhere to sit, so I stood in the middle at a shelf. There were five ales and one cider on handpump: Cronx Standard (£3.50/pint), Cronx Kotchin, Cronx Entire, Redemption Trinity, Burning Sky Plateau, and Wild Farmhouse cider. Nine of their ten keg lines were on too.

On another visit by Kake, bob, and friends on a Saturday lunchtime in February 2020, our party were the only people sitting in between noon and 1pm, but a couple of others popped in for takeaways. There were three real ales and two ciders as well as several keg lines, and they also had several non-alcoholic bottled beers in the fridge.

They don't do any food, just snacks like wasabi peas (£1.50 as of Aug 2017), chilli rice crackers, and peanuts. However, the beer can be taken into the main part of Boxpark, and apparently food from Boxpark can be brought into here as well.

Accessibility: No steps to get in, and there's a wide door. Seating is minimal. Toilets are the main Boxpark ones, which can be reached without using steps but are a bit of a trek.