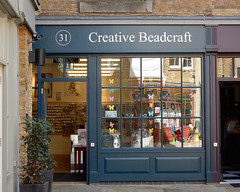 Once located on Beak Street photo, it first moved around the corner to Marshall Street photo and in January 2015 moved again to Smiths Court.

They used to stock the theatre costume trade, not sure if this is still the case. The shop doesn't have their full range on view; if you know what you are after ask at the counter.

They often have good bargain packs on display and these change regularly so its worth popping in now and then to see what they have. They also sell things like feathers and rhinestones (think stage costumes). Prices are ex-VAT.

[Tamsin]?'s verdict: I'm often disappointed with the range on display as it doesn't match up to Bead Aura or the Bead Shop, Tower Street.