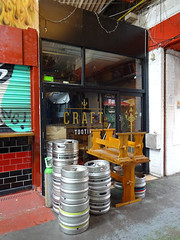 Small beer shop in Broadway Market, near Tooting Broadway Station. It describes itself as being near the closest market entrance to the Tube station.

secretlondon was wandering through Broadway Market in May 2016 looking for interesting food places when I saw this small shop. It describes itself as a shop and bar (but I'm not sure where you'd drink) and had apparently just opened that weekend. It had a small selection of craft beer (this is their shelf), mostly London brewers but with some from further afield.

Prices were typical for craft beer and they currently only take cash.