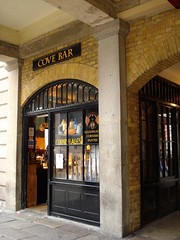 Cove was a smallish pub with a balcony above the West Cornwall Pasty shop in Covent Garden Piazza. According to the Beer In The Evening comments linked below, both the pub and the pasty shop closed in early 2011, and according to the Dec 2011/Jan 2012 issue of London Drinker, as of late 2011 the premises are occupied by a branch of Ladurée.

Smallish pub with a balcony above the West Cornwall Pasty shop in Covent Garden Piazza. It's located just inside the market building itself, in the north-west corner.

On our visit in August 2008 they had five beers on handpump — Skinner's Betty Stoggs, Iced Blonde and Cornish Knocker, St Austell's Tribute and Proper Job. They were all £3.60 and all kept fine.