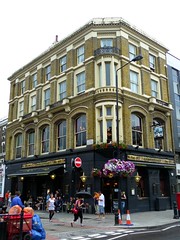 It's quite dark inside, with red and gold decor and amusingly skew-whiff chandelier-style lighting. Seating is a variety of high tables in the middle of the room with the bar, with tables around the edge of the room, and another level at the back of the pub (up a step, slightly darker) with comfy banquette seating.

Kake, Ewan, and friends visited on a Tuesday evening in September 2009. Arriving around 7:30pm, we managed to find a table, though the place wasn't empty by any means. Music was playing, not too loudly, but of a style characterised by our party as "sappy". Real ales available were Tetleys Dark Mild, Tim Taylor's Landlord (£3.20/pint), Greene King IPA, Abbot Ale, and London Pride, with Fuller's Summer Ale marked as "coming soon". On an October 2011 visit, ales included Greene King IPA and London Glory, Abbot Ale, Wadworth 6X and the like. Draught lagers included Estrella Damm and Staropramen.

Food is served at least lunchtimes and evenings, according to the 2010 Good Beer Guide.

Accessibility: No step to get in, but there's at least one step up and another step down to get to the toilets.