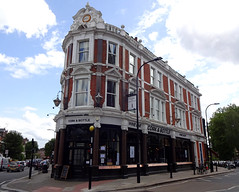 Restaurant and wine bar in Hampstead near Hampstead Heath Station, located in the old premises of the White Horse pub.

The long, thin interior has a bar in the middle dividing it into two halves. Patterned tiles are both underfoot and overhead, with the ceiling versions winning on the ornateness stakes. Its location on an acutely-angled corner allows for large windows on three sides, letting in plenty of natural light. Dark burgundy walls are enlivened with large reproductions of wine and champagne advertising posters. Seating is a mix of comfortably-padded banquettes, freestanding upholstered chairs, and tall stools lined up along the bar.

Their wine list is extensive and varied (which is unsurprising given the origin of this small chain as a basement wine bar near Leicester Square), and includes reasonably-priced by-the-glass options. They do also have at least three handpumps on the bar, though, which on our visit were clipped for St Austell Proper Job among others.

Kake visited on a Monday lunchtime in June 2019. There were already three customers when I arrived shortly after their opening time of noon, and another half a dozen turned up while I was there. Music was playing, relatively interesting, not too loud.

There were many interesting-looking options on the menu, divided into snacks, small plates, sharers, sides, salads, and large plates, but I chose one of the large plate options: gnocchi with spring vegetables, cauliflower puree, and pickled enoki (£13) photo.

The gnocchi themselves were a little dense for my taste, and perhaps also a little underseasoned, but they were fine when eaten with the perfectly seasoned, loosely-textured cauliflower puree. Cooking of the vegetables was well-judged, with a little bite still remaining to the courgettes and the cauliflower properly soft without falling apart. The enoki didn't taste pickled to me, but had a good flavour nevertheless. Overall, the dish was both well-designed and well-executed. I probably wouldn't order this specific item again since I didn't love the gnocchi, but it certainly made me keen to try more of the menu.

Tap water was brought without me having to ask, and when it came time for a top-up they gave me an entire jug. Service was friendly and helpful.

Child-friendliness: They have at least three highchairs, and there's a pull-down nappy change in the accessible toilet (key available from bar staff).

Accessibility: A small step to get in, about an inch or so. There's a RADAR-locked accessible toilet on the level; other toilets are down a flight of stairs in the basement.