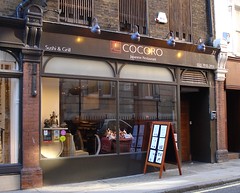 Japanese restaurant in Marylebone. The ground floor seats about 20 plus four more at the sushi bar. There's more seating in the basement, though this isn't always open. The ground floor decor is neat and simple, with a hardwood floor, cream-coloured walls, and comfortable padded seats at small square tables.

Kake visited late (2:15pm) on a Tuesday lunchtime in March 2010. Even though it was quite late for lunch, there was one other customer still there when I arrived. Music was playing, slightly cheesy, though not annoyingly loud.

I went for the sashimi/tempura set meal (£15), which in addition to the tempura and sashimi photo included three appetisers photo, miso soup photo, and rice.

The appetisers were good — a small green salad with a well-balanced dressing; shredded radish and carrot in vinegar; and long-simmered well-flavoured cubes of tuna. I would have preferred to have had more than a minute or so to eat them before the tempura arrived, though.

The tempura was less good; the batter was greasy and flabby, possibly because they hadn't given the frying oil enough time to come back up to temperature — this may be less of a problem at busier periods. Happily, the sashimi was fine, and beautifully presented with all kinds of supporting greenery and two little butterflies carved from beetroot.

Rice was a little mushy (again, this may be because I was there at the end of the lunch period and hence the rice had been being kept warm for a while). Miso soup was excellent, with deep, rich flavour.

Green tea was £1 and was fine. The cup was a decent size, though I would have liked to have been offered a refill.

They also do lunch specials, which seem to change from day to day; on the day of my visit it was tonkotsu ramen (£13 including miso soup, appetiser, rice, and dessert).

Accessibility: No step to get in, but there's a tight turn just as you enter. The toilet is up a flight of stairs with a bend in the middle and no handrail for most of the way.