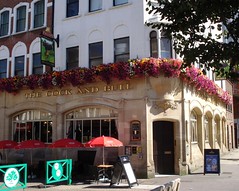 Fuller's pub in Sutton, fairly near the station.

Entry is into a reasonably large bar area, with a couple of steps leading up to more seating at the back. A refurbishment some time between 2012 and 2017 saw the removal of the carpet from this upper area, which now boasts a striking black-and-white hexagonal tiled floor along with yellow banquettes and a tucked-away armchair area. Flowers (somewhat wilted on our August 2017 visit) sit in vases on the tables.

Kake first visited on a Friday lunchtime in August 2012. Four ales were on, all from Fuller's: Chiswick, ESB, London Pride (£3.55/pint), and Wild River. There were a fair few people in at 1pm, with only a couple of tables still free in the front area (though plenty available at the back). A staff member was greeting customers on entry and offering table service for both food and drinks, though it's also fine to order these at the bar. Music was playing, fairly quietly.

Kake, Kat, and Ewan visited again on a Friday afternoon in August 2017. They had various Fuller's ales on as well as a blackberry goze brewed as a collaboration between Fuller's and the Heretic Brewing Company. Music was playing, very quietly. Service was friendly and helpful.

In August 2012, Kake tried the ricotta gnocchi with orange and sage brown butter sauce, served with a watercress and orange salad (£8.75) photo. The gnocchi were pretty good, and the sauce was flavourful, though sadly contained a couple of orange pips. The watercress in the salad was well past its best, wilted and yellowing; I didn't realise this until I started eating it, though, since it was concealed under some (perfectly fine and nicely flavourful) rocket. I'm guessing this was due to supply issues in the kitchen, but personally I'd have left off the watercress in this case and just made the salad with rocket.

Accessibility: A small step (kerb-height) to get in. Step-free access to bar and some (less than half) of the seating once you're in. There's an accessible toilet on the higher level, but no obvious way to get up there other than steps. Other toilets are up a flight of stairs with a bend and noncontinuous sturdy handrails on both sides.