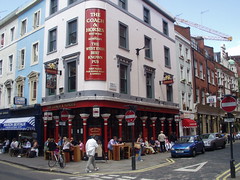 A famous pub in Soho, known for its gruff former landlord and its associations with the down-at-heel literati.

It was acquired by Fuller's in June 2011, and added to their tenanted (as opposed to directly managed) division. However, by January 2019 Fuller's had decided not to renew the tenant's lease, and instead announced plans to transfer it to their managed estate. The lease ended on 1 June 2019, and the former landlords departed later that month.

According to the Aug/Sep 2019 London Drinker, Fuller's reopened the pub on 29 June, though without its kitchen, which was still undergoing refurbishment. We haven't visited since the change of management, so some or all of the details below may be out of date.

Inside a lot of the old-fashioned fittings and furnishings are preserved, and it has the feel of a place untouched by modern trends (except perhaps in the selection of drinks and certain aspects of the food menu). Behind the bar are advertised, carved into the wood and back-lit, the names of now-historical brands like Ind Coope, Double Diamond, and Skol lager.

There are five handpulls, which on our June 2012 visit had three real ales: Fuller's Chiswick, Gales Seafarers (£3.70/pint), and Redemption Hopspur. We also noted Stowford Press and Old Rosie cider, as well as Thatcher's pear cider. They had Fentimans soft drinks too.

In mid-2012, the menu was changed to become completely vegetarian photo of menu board, but unfortunately the kitchen was closed on our visit (we didn't manage to find out why) so we couldn't try it.

When secretlondon visited in September 2008 there was a cockney singalong around a piano, and posters stating that this happens every Wednesday evening from 6:30pm. There were also adverts for live jazz on Tuesday evenings. (We're not sure how much of this is still going on.)