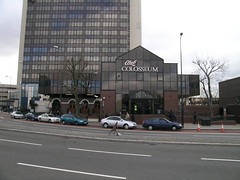 The building containing this nightclub was demolished starting in 2014, to clear the site for a new skyscraper development.

Club Colosseum is a large and friendly nightclub not far from Vauxhall Station. In addition to the main bar, which overlooks the river, it has three rooms, each with its own bar, giving it a total capacity of around 1500 people.

Security is quite friendly on the way in, and the view from the waterfront bar is quite spectacular. The bar ranges from cans of lager up to Dom Perignon at £110 a bottle; they serve Shark instead of Red Bull, at £3 a pop (beware that Shark glows an alarming bright yellow colour under UV lighting). Peanuts are 80p; they also serve crisps but no chocolate. Bar service is pretty friendly and efficient. One particularly neat thing about the cloakroom is that instead of handing out paper tickets for your coat or bag, they give you a little token on a string, which is much harder to lose, since it's solid and you can tie it to things.

Juliet says that she's never noticed a toilet attendant in the ladies'; doop usually sees them in the gents', where they can range from being very polite and unobtrusive to the usual sort who insist on trying to squirt you with things. The floor staff were very efficient, and could be spotted for most of the evening wandering around the dance floors collecting glasses and litter. The 40k soundsystem in the main room is clear and quite loud enough without being deafening. Music from any of the rooms can be piped into the bar area, so that you can relax with a drink and still listen to the main acts playing! doop has noticed that the bouncers are not above climbing up and peering down into adjacent cubicles in the gents if they think people are up to no good.

There is a smoking area outside which is still sheltered from the rain, although it's enclosed enough that if you head outside for a breath of fresh air, you might not find it.

The dance floors could get really quite hot and sweaty once things got going, although there are a couple of very large air conditioners around the edges, and there is also a rooftop terrace smoking area if you want to go outside. The organiser of the event I attended mentioned that running an event at the Colosseum was rather straightforward compared to some other clubs.

If arriving by bicycle, the car park adjacent to the club has several Sheffield stands, to which we were directed by a helpful bouncer.