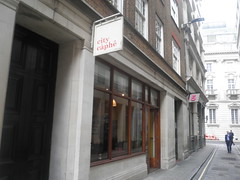 It's quite small, and much of its business is lunchtime takeaway for City workers. However, there's seating for around 17 or 18 people on shiny red chairs set at counters along the walls and a few small round pedestal tables with Vietnamese phrases painted around the edges (example: chào bạn đến quàn càphê gia đinh, which Google Translate tells me means "welcome to the family cafe"). The floor is bare floorboards, and the walls are painted a cheerful yellow and covered with photos.

The menu photo as of May 2011 is quite short: the options are pho, bun hue, rice vermicelli or rice with various toppings, banh mi (Vietnamese baguettes, all under £4 as of March 2013), and summer rolls. Vegetarian options are available for all of the hot options and the banh mi. Fish sauce, sriracha chilli sauce, and hoisin sauce sit in containers on the tables for those who wish extra customisation.

Kake visited late on a Thursday afternoon in May 2011. This was well outside their peak hours (lunchtime), but there were a couple of other customers in nevertheless. No music was playing, just the buzzing of the display fridge.

I only wanted something small to keep me going until I met friends for tea later, so I just had some summer rolls (£3.75 for two) photo. These weren't made fresh, but provided pre-packed photo in the fridge. Despite this, they were pretty good, with fresh mint and coriander and a good ratio of salad, noodles, prawns, and pork. The pork in one of them was a bit dry, but the other one was fine. They did stick together a bit, leading to one of them becoming somewhat structurally unsound, but this is probably because it was so late in the day and they'd been in the fridge a while.

There were some interesting-looking drinks in the fridge, including soya milk and grass jelly drink, and a board advertised hot drinks including Viet coffee made from Union Coffee Revelation blend, hot or iced for £2.50. However, they were happy enough to give me tap water instead (which was provided in a small paper cup).

Kake's verdict: I'm keen to come back and try the banh mi, since I've heard good things about them (see links below).

Kerry visited in March 2013 on a Tuesday around 1:15. There was a large queue and it took around 15 minutes to get food, but most people were getting sandwiches to take back to the office, so there were plenty of seats available. I had a chargrilled banh mi, summer rolls and iced coffee. The banh mi was my first ever and it was delicious; the summer rolls were also nicely flavoured. The iced coffee was very strong and very sweet - which I liked, but definitely be warned! They make it with condensed milk, which I understand is traditional in Vietnam.

Accessibility: No step to get in. Not sure if there's a toilet. Although some of the seating is at counters along the walls, these are at the same height as normal tables.