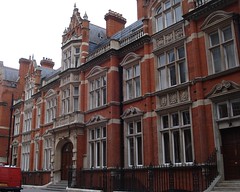 Upscale Indian restaurant in Westminster, in the 2007 Good Curry Guide.

The a la carte menu is fairly small, containing virtually none of the dishes you would normally expect to find in an Indian restaurant. There is also a tasting menu, and there appear to be seasonal tasting menus too - when DrHyde visited in December 2009 there was also a game tasting menu, for example, which DrHyde tried and was very pleased with. There is an extensive and rather expensive wine list.

A three course dinner for three people, with a bottle of wine, was £260, and was only so cheap because one of us was a veggie, for whom there are no exotica on the menu. If we'd stuck to more "normal" dishes instead of having a blow-out on the game tasting menu and wagyu beef, it would have been more like 180.

They have two other branches: Cinnamon Kitchen in the City and Cinnamon Soho in Soho.